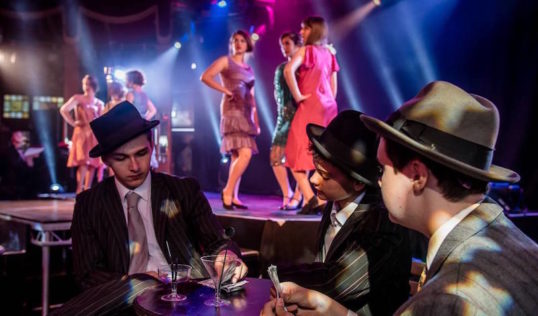 Captivate Theatre turns the Gilded Balloon’s Rose Theatre into a smoky den that works perfectly for the action.

As the audience walks into the auditorium, they are greeted with a pianist tickling the ivories to earn his bread and a selection of soulful singers with some brilliant standards. The smoke is thick, the atmosphere intense and the pre-set a perfect transition into the world of Bugsy and his chums – the stage version of Alan Parker‘s inspired pastiche musical.

We meet protagonist Bugsy Malone (Ollie Hiemann), an assured – but cagey – charmer who won’t let anyone know what his business is. The part is made for young Hiemann, who appears every bit a smooth talker as the character he plays. His cheeky persona brings plenty of laughs to the piece.

Tallulah (Frankie Blair) gives a star performance, getting the gritty fed-up part of her character to a tee, as well as offering up a stunning vocal drawl.

As Bugsy’s love interest, Blousey (Lily Constanti) develops from afraid and hesitant to brash and ballsy. This development is delightful to watch, but Constanti really knocks out when she sings. Though just a young actor, her potential is great based on this winning performance.

The production is full of fantastic hits from Paul Williams, like “Fat Sam’s Grand Slam”, “Tomorrow” and the brilliant “You Give A Little Love”. Each of the numbers is ably supported by musical director Liam Forrester.

The show oozes feel-good and moves at a good pace. Younger members of the ensemble are given their chance to shine and they take the opportunity with both hands.

Bugsy Malone is an engaging, exciting and hilarious piece of theatre. Captivate Theatre has once again brought a classic into the 21st century with a simple yet effective production. 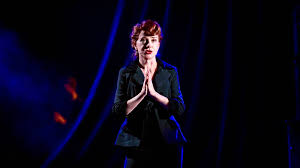 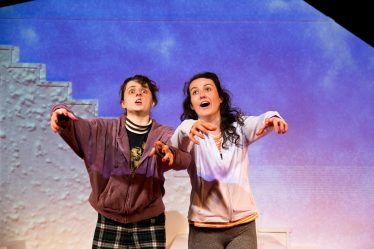